Whether you’re in the mood for stand-up comedy, ballet, opera, melodrama, Broadway-style productions, or live music… we have something for you. If you prefer your entertainment live and in living color, then the broad spectrum of top-notch entertainers in Wichita will surely satisfy.

Sigh for the dainty heroine, cheer the stalwart hero and boo & hiss the dastardly villain at Wichita’s only audience participation dinner theatre – where you are part of the action!

Treat yourself to a night of spectacular entertainment during Music Theatre Wichita’s 2016 summer season from June through August. Featuring guest stars from Broadway and Los Angeles, MTWichita’s productions have proven to be the springboard for the next generation of young Broadway artists, with nearly 40 alumni currently appearing in New York. MTWichita’s productions are complete with lavish sets and costumes, full orchestras, large casts, and the Broadway stars of today and tomorrow, all at a fraction of Broadway prices. 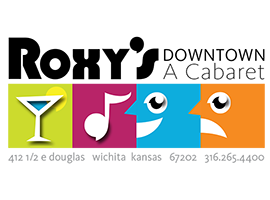 If you want to be entertained, looking to create that perfect date, or simply wish to fly solo and spend a great evening with like-minded art-loving folk, Roxy’s Downtown will be the first venue that comes to your mind.